Is Israel’s Merkava Tank The Best on the Planet?

Is Israel’s Merkava Tank The Best on the Planet?

The Merkava was first conceived by Israeli General Israel Tal following the titanic armored clashes of the Yom Kippur War. Tal wanted a tank that prioritized crew protection above all else. The Merkava I entered service in 1978, and saw its first major action in Operation Peace for Galilee in 1982, where it performed well in engagements with Syrian T-62 tanks. Nonetheless, several were lost in battle, and the subsequent Merkava II tank featured upgraded spaced armor. The 1990s saw the Merkava III with a critical upgrade to a 120-millimeter main gun, and finally, the latest Merkava IV has a more powerful engine and has recently been fitted with a sophisticated active-protection system for use against anti-tank missiles and rockets. Watch the video for more: https://youtu.be/JhU_QLuiHzM 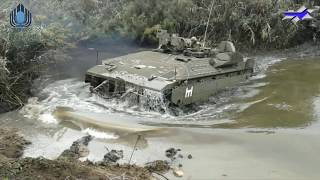